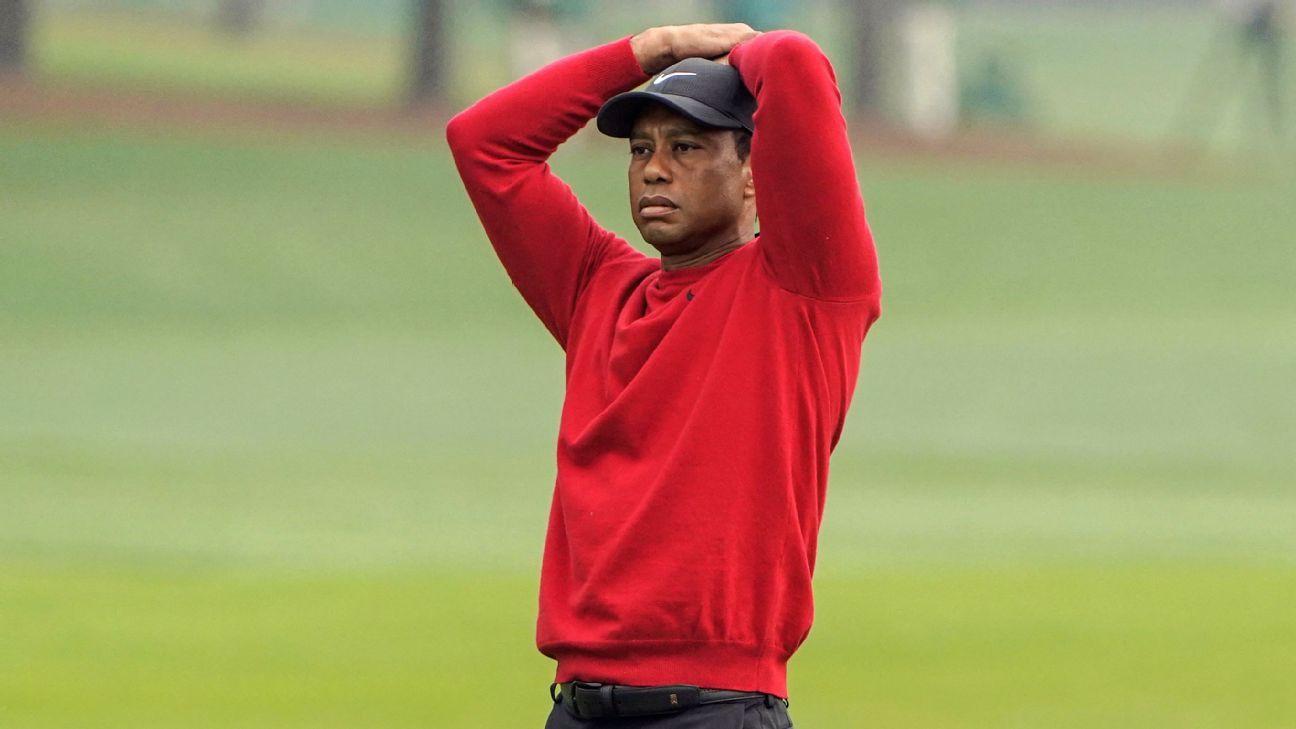 Tiger Woods left the grounds at Augusta National on Sunday afternoon without his green jacket, knowing all too well that he might not ever have the opportunity to take it with him again.

Oh, it will always be there for him in the Champions Locker Room, waiting for his next visit, whether it’s a friendly practice round or the Masters Tournament he has won five times.

It is Dustin Johnson who now gets to enjoy the spoils of victory, among the many traditions associated with Augusta National and the Masters.

Woods, 44, has contemplated his golf mortality before, most notably in the spring of 2017 when his back issues were so acute he consulted with experts in London before choosing what was considered a last-gasp spinal fusion surgery.

We all know the rest: He came back and had a remarkable 2018 season that saw him contend several times and win the Tour Championship; he won the Masters in 2019 for his fifth title at Augusta, his 15th major and first in 11 years; and he later captured the Zozo Championship to tie Sam Snead with 82 PGA Tour victories.

After a strong performance at the Presidents Cup last December, Woods seemed on track to break Snead’s record and have further moments of glory.

All of that seems more remote now, which is why Woods was so emotional and contemplative last week.

He nearly came to tears in his pretournament media session, describing the scene of his 2019 Masters win. Jack Nicklaus and Gary Player later disclosed that Woods was unlike they had ever seen him at the Champions Dinner, delivering a heartfelt talk and acknowledging that he had to pull over on the way to the club that evening, the thought of the jacket never leaving the premises again fully on his mind.

He got off to a good start in his 23rd Masters appearance, but then was doomed by the things that are very real for him today: chilly temperatures, a break between rounds, lots of golf. Woods was out of the tournament early in the third round, left to play it out on Sunday.

The 10 on the 12th hole — his highest score as a pro as he hit three balls into Rae’s Creek — only added to the disappointment.

Then something strange and wonderful occurred. Instead of sulking — and who could blame him if he did? — Woods got back to work. He birdied five of the last six holes. He had a makeable eagle putt at the 13th, chipped close at 15, knocked it stiff at 16, and hit nice approaches at 17 and 18.

“He’s Tiger Woods, isn’t he?” said Shane Lowry, who played with Woods during the first two rounds and again on Sunday. “He’s the best of all time. I don’t think it matters to him whether he finishes 30th or third here. A win is all he’s looking for. What a finish. He seemed to hit every shot stone dead then for the rest of the round.”

One of the underappreciated aspects of Woods’ career is his will, his pride. The victories, the majors, the scoring records … they get the attention. But Woods once made 142 consecutive cuts. He has never missed a cut as a pro at the Masters. Only this year did he surpass 20 worldwide cuts for his 23-year-plus career.

So the question as to his motivation over the closing holes on Sunday might be put to his career at this point. What’s left to do? He will be 45 when he likely tees it up in January at the Farmers Insurance Open. The strain of trying to get ready for tournaments is real and was on display again at the Masters.

Tiger Woods birdies five of his last six holes to finish the Masters on a high note at 1 under.

Woods is caught between the need to play more tournament rounds and the knowledge that if he overdoes it, he will be ineffective. Same for practice. He needs to work on his game. Hitting too many balls, however, becomes a physical issue for which he would then pay a price.

In the aftermath of his finish Sunday, in a situation where such a question is awkward, I attempted to ask Woods about his motivation at this point, given his body of work and the struggles he faces.

“Yes, it is more difficult than others to be motivated at times. Because things just ache and have to deal with things that I’ve never had to deal with before.”

Woods was waiting for the green jacket ceremony, where he would do the honors for Johnson and he seemingly enjoyed every moment. He later tweaked the newly crowned champion with a tweet in which he expected Johnson to serve sandwiches at next year’s Champions Dinner, a nod to the winner’s comment earlier in the week that those sandwiches at the club are among his favorite things.

Looks like we’re having sandwiches for next year’s champions dinner! Congrats @DJohnsonPGA and welcome to the club. pic.twitter.com/amOfc2kVXG

There is no Hero World Challenge to worry about in December, the event having been canceled. There’s no long trip to Australia for the Presidents Cup, where he was the best player last year but where even there back stiffness led him to sit out all of Saturday’s sessions.

Playing those events at the end of last year impacted his preparation for 2020. He tied for ninth at the Farmers Insurance, and then never came close to that form again, even though he had the entire three-month pandemic shutdown to get fit.

In the seven events past the shutdown, his best result was a tie for 37th at the PGA Championship. He tied for 38th at the Masters. It was just the third time he finished outside of the top 20 as a pro at Augusta.

“He worked pretty hard this week,” said Woods’ caddie, Joe LaCava. “If he continues to do that, there will be some good times next year. He drove it well this week for the most part, hit a lot of different shots, the high bombs, little low cutters. He’s working the ball nicely and he feels pretty decent. If he can stay healthy, there were some good signs this week.”

There probably isn’t a better person for Woods to have in his corner than LaCava, who has remained remarkably positive during even the darkest times.

Without any tournament golf to worry about, Woods has less on his plate. He has some corporate obligations, equipment testing, sponsorship duties. He’ll undoubtedly get in the gym and do his best to get fit for 2021.

When he returns, the idea of making the U.S. Olympic golf team or even the U.S. Ryder Cup team is now far more remote than it was when those events were supposed to be played in 2020 and he was on the cusp of both.

But he will always have the Masters, and at least this time, it is not so far off.

Why and how the National Security Strategy should address fragile states

Coming To America’s Eddie Murphy On Being Forced To Add A White Character To...

Movie anothernews - March 2, 2021 0
So if Coming to America had progressed without this studio note, Louie Anderson wouldn’t have been included in the feature, and presumably his...

NYC Movie Theaters Are Re-Opening This Weekend, And Tenet Will Be There

The Political Economy of the Abe Government and Abenomics Reforms

Politics anothernews - March 2, 2021 0
This volume seeks to explain the political economy of the Abe government and the so-called “Abenomics” economic policies. The Abe government represents a...