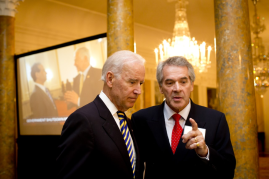 In his new memoir “They Call it Diplomacy,” former British Ambassador to the United States Peter Westmacott looks back on 40-years of service as a diplomat for the United Kingdom. Over the course of his distinguished career, Ambassador Westmacott served in many important roles, including as ambassador to Turkey, ambassador to France, and most recently, as ambassador to the United States. His career spanned the end of the Cold War to the post-9/11 era. And as second secretary in Tehran, Ambassador Westmacott spent four years as a diplomat in Iran in the lead up to the 1979 revolution. As the Biden administration develops its strategy for U.S. foreign policy and charts a way forward in arms control and nuclear policy, it is a critical time to evaluate the importance of diplomats and the role they play in engaging on the ground with communities in key regions across the globe.

On May 5, Foreign Policy at Brookings will host Ambassador Westmacott for a panel discussion on the future of the broader Middle East and the crucial role of diplomats in shaping foreign policy.

Viewers can submit questions via e-mail to events@brookings.edu or on Twitter using #Diplomacy or #MiddleEast.