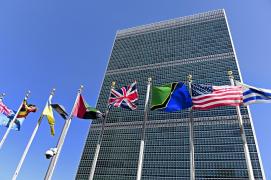 After the Cold War, many in the United States believed democracy was fait accompli around the world. Thirty years later, it is on shaky ground. U.S. allies such as Turkey, Hungary, and Poland are sliding into authoritarianism. In the wake of the 2008 global financial crisis, dreams of economic and social stability are finding renewed purchase over more liberal values. President Biden plans to host a global summit for democracies to restore American alliances and revive democracy’s competitiveness. But is this the wisest or best response? On this week’s episode of None Of The Above, the Eurasia Group Foundation’s Mark Hannah is joined by James Goldgeier and Elmira Bayrasli to dig into the history of America’s alliance building strategy, a history which is shaped more by shared security interests than by shared values.