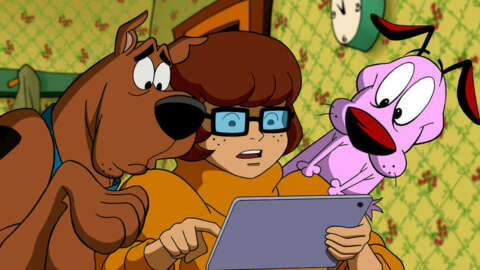 A spooky monster emerges from the shadows, and your canine companion screams and makes a run for it. Is it Scooby-Doo or Courage the Cowardly Dog? In Straight Outta Nowhere, it turns out, it’s both, and we have a first look at the trailer thanks to SyFy.

If you’re a fan of old-school animation, you won’t want to miss this one. Hitting both digital platforms and DVD this September, Straight Outta Nowhere takes the Mystery Inc. Gang right out to the middle of Nowhere, Kansas–Courage the Cowardly Dog’s turf. The two iconic pups meet for the first time to face off against a giant cicada monster.

“[Straight Outta Nowhere] is definitely going to trigger acute nostalgia for those of us who grew up watching both Scooby-Doo and Courage shows, and it will also bring these wonderful characters to a new generation of viewers,” said director Cecilia Aranovich in an official statement.

“Merging the two worlds in a cohesive manner was one of the most challenging aspects of production,” Aranovich said. “But I feel we found the right balance by bringing in the design elements and the color palette from the Courage world, as well as infusing Scooby and the gang with the more over-the-top takes and reactions that are so characteristic of Courage. The movie is filled with Easter eggs from the first Courage series, and it is packed with quirky humor, offbeat characters, outlandish action scenes and, of course, the mystery factor that is inherent in every Scooby-Doo plot.”