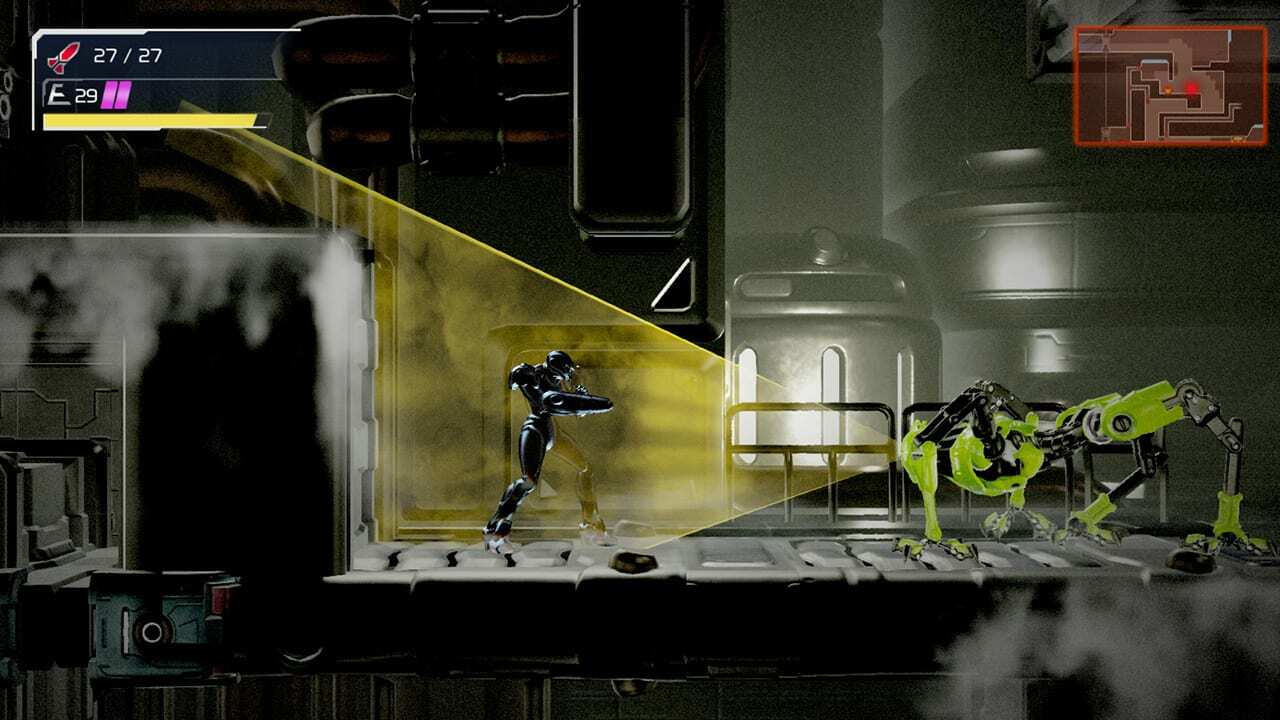 Nintendo has shared a new blog post on Metroid Dread. This one delves further into the EMMI, the seemingly invincible robotic foes that stalk the corridors of planet ZDR and hunt Samus down as she explores.

As previously revealed, the EMMI (short for Extraplanetary Multiform Mobile Identifier) are research robots that were deployed to ZDR by the Galactic Federation. The EMMI’s initial mission was to research the X parasite, but something has seemingly corrupted the robots and caused them to identify Samus as a target.

Each EMMI patrols a particular zone of ZDR that’s cordoned off by distinct pixelated doors. The EMMI roam about freely within this zone, and their armor is impervious to Samus’s conventional weaponry, so you’ll need to avoid detection. The EMMI will emit a blue light while in patrol mode. That light will turn yellow when the EMMI has detected a sound and enters search mode. If the EMMI spots you, the light will turn red and it’ll enter pursuit mode, chasing you down “at high speed.”

Getting caught by an EMMI will almost certainly result in a game over, but Nintendo says you’ll have a very narrow window of opportunity to escape the robot’s grasp. Time a melee counter the moment the EMMI opens itself up to attack and you’ll get another chance to flee. However, Nintendo warns that “this window of opportunity has such narrow timing of success you may consider it nearly impossible to land a counter–so much so that you may want to avoid this situation at all costs.”

Upon entering an EMMI zone, its layout and door locations will be marked on your map to make it easier to spot potential exit routes. These doors will be locked when an EMMI is in pursuit mode, however, so you’ll first need to shake them off before the doors open again. Fortunately, Nintendo says that “there’s always a nearby checkpoint to restart from” by the EMMI zones should you end up getting caught.

Although they initially seem invincible, there is a way to defeat the EMMI. After you’ve absorbed energy from the Central Units (which Nintendo describes as “the mother computers managing each EMMI Zone”), Samus’s arm cannon will temporarily transform into the Omega Cannon, allowing her to fire two special attacks the EMMI are vulnerable to: the rapid-fire Omega Stream and the charged-up Omega Blaster.

After you’ve obtained the Omega Cannon, you’ll need to hold the L button down to enter Aim Mode and then hold Y to unleash the Omega Stream. Attack the EMMI long enough and you’ll eventually overheat its protective plating, causing it to shatter and leave its vulnerable core exposed. Once its core is visible, hold down the R button and press Y when fully charged to unleash the Omega Blaster and destroy the EMMI.

As Nintendo explains, “Samus cannot move while charging the Omega Blaster. As the deadly EMMI approaches, you’ll have to overcome your fear and stand your ground to charge the Omega Blaster, then unleash this energy to land a finishing blow. This creates a build-up of tension and an exhilarating payoff for the player after pulling it off successfully.”

Metroid Dread launches for Nintendo Switch on October 8. In addition to the standard version, Nintendo is also releasing a collector’s edition that includes a steelbook case, art book, and collectible art cards. You can read more in our Metroid Dread preorder guide.