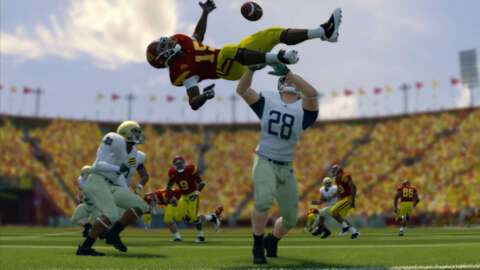 The NCAA has approved legislation allowing college athletes to earn profits from their name, image, and likeness, according to an NPR report.

Previously, college athletes had limited compensation packages for things like scholarships or other forms of educational payments. Under new laws, however, college athletes can now make money performing activities professional athletes engage in. This includes things like endorsement deals, signing autographs, and social media content. This may also include college sports games, like EA’s college football title possibly launching in 2023.

We’ve reached out to EA for comment and will update should we hear back.

NCAA president Mark Emmert said it’s “an important day” for college athletes and that the organization will “work with Congress” to enact more widespread legislation.

“This is an important day for college athletes since they all are now able to take advantage of name, image and likeness opportunities,” Emmert said. “With the variety of state laws adopted across the country, we will continue to work with Congress to develop a solution that will provide clarity on a national level.”

The last college sports game was NCAA Football 14. There hasn’t been a college basketball game from EA since 2009, with both franchises unceremoniously ending in the same year thanks to the O’Bannon v NCAA lawsuit.

Development on Electronic Arts’ upcoming college football game, which was announced back in February, is only just getting started, according to the publisher. It will feature over 100 teams and replicate their logos, stadiums, uniforms, and gameday traditions; however, EA is not working with the NCAA at all on the new game due to various ongoing lawsuits and these legal proceedings. This is also why the company is doing away with the “NCAA Football” branding moving forward.