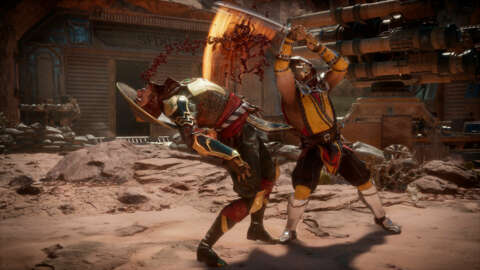 NetherRealm Studios has officially ended support for Mortal Kombat 11, bringing more than two years of updates, character releases, and additional story content to an end. The studio says it is now fully focused on its next project, which has yet to be announced.

Mortal Kombat 11 launched in March 2019 and has since received a lot of additional content. NetherRealm released two Kombat Packs for the fighter, introducing series-favorite characters such as Nightwolf, Sindel, and Mileena. The packs also featured some signature wildcard picks, including The Terminator and Spawn.

NetherRealm is now focusing on its next project and after more than two years of supporting Mortal Kombat 11, DLC for the game, including characters, has come to an end.

In the past, NetherRealm has announced its new projects every two years, making this year the first time in a while that its self-established pattern has been broken. It is also unclear yet if a new Injustice sequel will follow on from another core Mortal Kombat release like the series has in the past, with suggestions that NetherRealm might be working on something else entirely. There has been some suggestion that the studio might be working on a game with Marvel involved, with creative director Ed Boon fanning the flames on Twitter.

Mortal Kombat 11 was another great entry in the franchise since its successful reboot with Mortal Kombat in 2011. In GameSpot’s 9/10 Mortal Kombat 11 review, editor Edmond Tran praised the game’s wide appeal, writing, “MK11 isn’t just a sequel for series fans and NetherRealm devotees, it’s a gateway into the realm of fighting games for anyone who has a passing interest in watching ruthless warriors beat each other silly.”