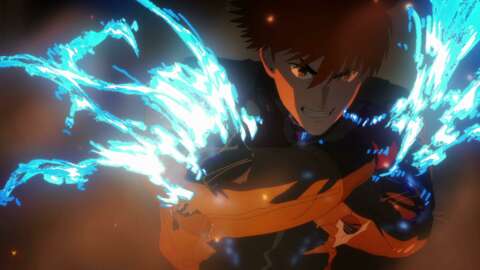 Netflix has been going all-in on anime for a couple years now, and is showing no signs of slowing down. Today, the streaming service dropped a new teaser for its upcoming series Spriggan, along with an idea of when we can expect it.

Spriggan, heading to Netflix in 2022, is based on the manga of the same name, written by Hiroshi Takashige and drawn by Ryoji Minagawa, which ran from 1989 to 1996. Spriggan centers on Yu Ominae, a high school student who is also an agent of the ARCAM corporation. As a Spriggan, he helps the organization protect ancient relics. The word Spriggan comes from Cornish fairy tales, where a creature of the same name is believed to guard treasure in ancient ruins and barrows.

Hiroshi Kobayashi (Dragon Pilot) is directing a screenplay written by Hiroshi Seko (Jujutsu Kaisen). Overseeing character designs and animation is Shuhei Handa (Little Witch Academia). Veteran anime fans will remember that Spriggan came to life as an anime movie back in 1998, which was directed by Hirotsugi Kawasaki (Ghost in the Shell, animation department) and overseen by Katsuhiro Otomo (Akira, creator).

Netflix has seen huge viewership of its anime library, with 100 million households watching, pushing anime into the top 10 lists of the service in almost 100 countries. The popularity is having a knock-on effect, too, with a bunch of Western series receiving their own animated adaptations, including the just-finished Castlevania and its announced sequel, upcoming series based on Splinter Cell, Far Cry, The Witcher, DOTA 2, and more.