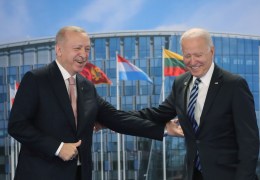 President Joe Biden has made it six months into his term without a new U.S.-Turkish crisis. Amidst simmering tensions, strategic disagreements, and so many potential flashpoints, even this comparative calm counts as an achievement. It is a product of both the White House’s new approach to Turkey and Ankara’s eagerness to maintain the appearance of good relations in the face of more pressing problems. Biden has been appropriately cool and consistent in his dealings with Turkey, emphasizing human rights in his rhetoric and seeking to establish a new tone for the relationship that will give the United States greater leverage. This has corresponded with a period of consolidation and greater caution in Turkish foreign policy. President Recep Tayyip Erdoğan, for his part, has been on an international charm offensive as he confronts regional isolation, economic turbulence, and his own dwindling poll numbers.

Biden and Erdoğan’s June 14 meeting in Brussels, on the sidelines of the NATO summit, seemed to confirm the comfortably dysfunctional contours of this new relationship. None of the two countries’ outstanding issues were resolved, but both leaders walked out gamely insisting they could be.1 The challenge for Washington now is to maintain the benefits of Biden’s current approach as conditions in Turkey and its region inevitably shift in unpredictable ways. Rather than appear over-eager to improve relations, Washington should simply leave the ball in Ankara’s court. This means staying the course while minimizing Turkey’s ability to disrupt U.S. and European interests. At best, Biden can seek to establish a modus vivendi with Erdoğan premised on perpetuating the status quo in the absence of any further provocations.