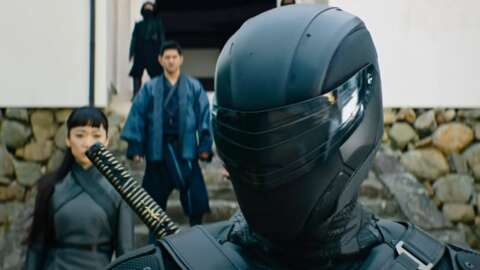 The coolest G.I. Joe character, Snake Eyes, is finally getting his own movie in just over a week. More importantly, though, Snake Eyes is getting a Fortnite skin, so it only makes sense that Henry Golding, who plays the character in Snake Eyes: G.I. Joe Origins, would sit down to play a few rounds as himself.

Streamed yesterday, Henry Golding joined streamers Fuslie and Brooke AB for a 40-minute session that had each of them suiting up as the cartoon ninja to play a few rounds of Epic’s smash-hit game. While they played, the trio were tasked with answering trivia questions. The first round, “Name That Joe” had them answering questions like “This Joe was a member of a band with his two brothers;” the second, “Snake or Fake,” asked them to discern between real and pretend names of various snake species. Golding also talked about the training he went through before the film, including working with a Japanese trainer to get the hang of the katana.

Golding seems comfortable at the mouse and keyboard throughout the video, though he does better with trivia than frags; the endless string of friend requests popping up over the action probably didn’t help any.

Snake Eyes hits theaters on July 23. Ahead of that, make sure to check out the first and second trailers for the film, and to check out our coverage of G.I. Joe toys including, yes, Snake Eyes.