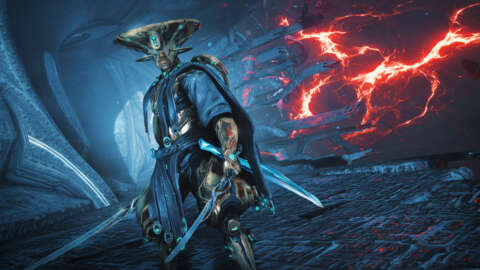 At TennoCon 2021, developer Digital Extremes finally revealed more info about Warframe’s The New War story expansion, which was first teased back in 2019. Coming later this year, The New War is a new cinematic story quest focusing on the Tenno and other factions entering a new phase of conflict that was will stretch across the entire star system. This new story expansion will also signal the next phase for the free-to-play action RPG, which will see cross-play for all versions of the game coming at a later date.

During the TennoCon 2021 live stream, we saw over 30 minutes of extended gameplay for The New War expansion. This cinematic quest line sees the Tenno–the faction of Space Ninjas–work with allies from other factions to face off against the artificial life-forms known as the Sentients, who have invaded Cestus on the Planes of Eidolon. According to the developers, The New War will be the longest story quest the game has seen yet. In a similar vein to previous cinematic quests like The Sacrifice and The Second Dream, The New War will take you on different missions with set-piece encounters and bespoke story beats that will reveal new lore about Warframe’s key characters and factions. This new expansion will also set the stage for coming with the following expansions and live events.

The extended gameplay reveal from TennoCon 2021 started off with a bang, showing off the scale of the Sentient invasion. In a surprise twist, we then cut to gameplay for characters other than our familiar Tenno. While your adventures throughout Warframe have focused on the Tenno, The New War will mark the first time players take on an active role as side characters for story missions. In the gameplay we saw during the stream, The New War will feature missions letting you control the sword-wielding Teshin of the Conclave faction, Kahl-175 of the Grineer, and the Corpus engineer Veso. These standalone missions will focus on each character’s particular loadout and skills, making them stand apart from the slate of Frames you’ve become well accustomed to over the years. However, The New War will still focus on the Tenno and their actions during this quest.

As a long-time Warframe player, it’s interesting to see the game take some time away from our core slate of Frames to focus on other side characters. While two of the original characters we will play in The New War follow closely with the standard Grineer and Corpus soldier archetypes we’ve seen often, Teshin looks to be the most unique to play as. He doesn’t have the maneuverability of the usual frames, but he does make up for it with other gadgets like a grappling hook, which makes playing as him look fun. I’m interested in seeing how each of the new characters’ story paths will change, and if they’ll meet up at some point during The New War expansion.

Another big reveal that came out from TennoCon 2021 was that not only is that cross-play and cross-save are in the works, but also a mobile version of Warframe is on the way as well. During a live playthrough, the developers played a game of Warframe set in the open-world map on the Planes of Eidolon with PC, PlayStation 5, Nintendo Switch, and a mobile device. According to developers, this has been a “dream” feature for the game that they have wanted for some time. Cross-save, cross-play, and mobile are still in active development, and the devs stated that more info and details would come later this year.

Warframe Cross Play and Cross Save (In Development) Announcement Trailer

In a press release, Digital Extremes Chief Operating Officer Sheldon Carter stated The New War and the addition of cross-play will mark the beginning of the next-generation experience of Warframe, laying the groundwork for what’s to come in the future.

“Community is incredibly important to us. Opening up cross-play and cross-save is just one of many more efforts we’ll take on to bring more players together, including extending Warframe’s fast, fluid, action combat experience to other global gaming platforms,” said Carter. “We are at the very beginning of the next generation of Warframe. We are eight years young and have the benefit of beginning our second console generation with a major game expansion that will also mark a new chapter of more story-based content our players have been asking for.”

Along with the updates on cross-play and The New War, we also saw a slate of other updates coming to Warframe, including more customization options to use for your clan hideouts, along with more info on the new premium Frame, Nidus Prime. Players who watched the live reveal on Twitch and within the in-game relays also got a chance to earn rewards, including access to Loki Prime and new cosmetic items.