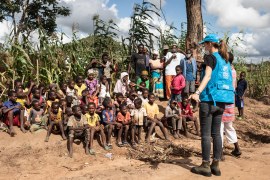 The West is shifting its gaze from fragile states. After 20 years, the United States is headed for the exits in Afghanistan, pulling NATO with it. French President Emmanuel Macron is ending the Barkhane operation, pulling many of the more than 5,000 French troops from the Sahel, where they’ve been fighting a vicious jihadi insurgency since 2014. The U.K. has discussed a draft security and development review which suggests a major redeployment of its efforts to Asia. The EU is rethinking its global strategy to focus more on new global risks including China and Russia.

But fragile states may not so easily loosen their grip on the West. Even as the Biden administration has begun to bed down its core strategy, oriented towards competing with China and Russia and reasserting U.S. leadership of the “free world,” fragile states have thrust themselves onto its agenda, and that of key European leaders. Events from the Americas to Africa to Southeast Asia in the past six months have shown the potential costs of a loss of focus.

On February 1, Myanmar’s military staged a coup, detaining State Counsellor Aung San Suu Kyi, President Win Myint, and others and introducing a state of emergency for a year. The coup ended nearly 10 years of a semi-democratic experiment. Massive protests followed, as did violent crackdowns by security forces. Fighting with minority armed groups has flared up, and Thailand and other bordering countries have seen flows of refugees. The country might be moving towards open civil war.

In the same time period, fighting in Yemen flared up, after Washington pressured Saudi Arabia to try to put an end to the conflict. The result is a worsening of an already dramatic humanitarian crisis. Renewed attacks by Houthi rebels on airports in the south, on the city of Marib in the highlands, and drone attacks across the border with Saudi Arabia have demonstrated how hard it will be to move towards a cease-fire and some form of stability.

In the Americas, Haiti’s slow and steady institutional collapse has worsened. An epidemic of kidnapping for ransom by local gangs preceded the July 7 assassination of President Jovenel Moïse by mercenaries, one of them apparently a U.S. citizen, which has thrown the country into a deep constitutional crisis. Venezuela’s internal political crisis continues unabated, and the country is sending record numbers of refugees across its borders, many of them headed to the United States.

In March a large surge of migrants, many of them children and young adults, appeared at the U.S.-Mexico border. The Biden administration struggled to respond to the politically delicate situation. The administration acknowledged that the source of the problem was the very high level of fragility in the countries of the Northern Triangle: Honduras, El Salvador, and Guatemala, which are afflicted by gang violence at levels hardly reached elsewhere, high levels of corruption, poor governance, and increasingly by populism and authoritarianism. The U.S. is awakening to the fact that it does not have a coherent strategy for the Northern Triangle, nor do most of the multilateral agencies that deal with fragility in Central America. (Indeed, these countries are not even on the World Bank’s fragile and conflict-affected situations list, depriving them of hundreds of millions of dollars that could be used to address some of the fragility challenges they face).

In Africa, Mozambique has seen renewed violence by an Islamist group connected to Somalia’s al-Shabab and the Islamic State. Palma, a major economic hub for natural gas extraction, was occupied for nearly 10 days, causing Total to suspend a $20 billion gas project, a major economic blow to the country. In April, fighting erupted once again in the streets of Mogadishu, because of a political crisis ignited by Somali President Mohamed Abdullahi’s decision to delay elections, a major step back after many years of improvement in both governance and security in Somalia. In Ethiopia, internal and cross-border fighting in the Tigray region has seen large-scale denial of humanitarian access, killings of civilians, and the imminent threat of famine.

The Sahel has seen multiple crises over the first six months of 2021, making the situation in this large region increasingly precarious. President Idris Déby Itno of Chad, the country with the strongest army in the region, which has been an essential asset in the war against jihadis, died in a fight with rebels coming from Libya, creating strong risk of instability in the country. On May 24, Mali’s government was overthrown in a military coup — the second in less than a year — leaving the country in turmoil.

Fragility is one of the most vexing problems of our time. Fragile countries, most of them affected by conflicts and violence, experience serious lack of social cohesion, cannot reach viable political settlements, have weak institutions, high corruption, and governments that struggle to deliver the most basic services to their population. Over the last 20 years large amounts of resources have been poured into these countries to try and strengthen their capacity, help the populations cope with fulfilling their most basic needs, and create a semblance of stability. Extremely expensive military operations somewhat helped in containing jihadi insurrections, but have not been able to deliver decisive progress. Bilateral donor organizations from Organisation for Economic Co-operation and Development countries and international development organizations have shored up their financing and developed strategies with some success but many of their programs remain very much classical state-building and development programs that have only limited effectiveness in these contexts. No surprise: Even the most optimistic assessments suggest that stability in fragile states requires a generational effort.

Despite these challenges there are many reasons why Western countries cannot really drop their attention to the unfinished business of fragility:

For many years, the U.S. strategic community has been engaged in a running debate: Do geopolitical threats or transnational threats matter more? During the intensive focus on the “global war on terror,” geopolitical dynamics received less attention. Now, as the U.S. and its allies are struggling to get on a competitive footing in geopolitical competition, they risk over-correcting and ignoring or paying insufficient attention to fragile states.

Keeping a close engagement on fragile states does not mean extending large-scale military presences as the lead tool of response; indeed, that was never a well-crafted strategy, nor was it politically sustainable. Going forward, the U.S. and its partners should continue to put political pressure on fragile states to reduce corruption, protect human rights, and improve the quality of their institutions. When regional, multinational, and in some cases United Nations peacekeeping interventions are possible, the U.S. should support them with targeted resources and political backing. The U.S. and its partners should continue to put pressure on multilateral banks and the U.N. to collaborate in preventing violence and fragility in fragile settings. Above all, Washington and its democratic partners should be working in lock-step to create comprehensive support for security, peace-building, and development in fragile states, which face mounting pressures to turn to authoritarian powers for support. The U.S. recently adopted a Global Strategy to Prevent Conflict and Promote Stability and Congress has passed the Global Fragility Act. Many European countries and multilateral organizations had already such strategies in place. They all need more prominence — and need to be closely coordinated among Western partners.

Rebalancing policy priorities to the morphing challenges posed by China and Russia is wise policy; abandoning fragile states engagement altogether is not.

Kennedy, Cuba, and the “War of the Sands”