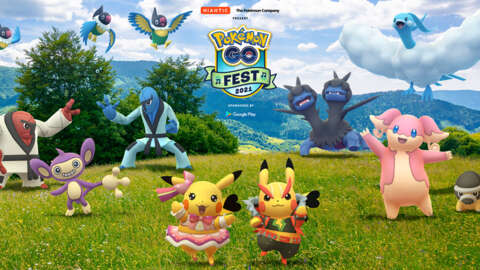 Outside of a handful of official in-person gatherings around the globe, 2021 marked the second year running that Pokemon Go Fest–the Pokemon mobile game’s biggest annual event–was largely held virtually. Although developer Niantic has traditionally hosted Go Fests at real-world venues, the COVID-19 pandemic forced the company to pivot to a virtual format for 2020’s event. Despite the impromptu shift, Pokemon Go Fest 2020 turned out pretty well, and Niantic built upon the lessons it learned last year to make Pokemon Go Fest 2021 one of the best events it’s ever held for the game.

Just as last year, the festivities were spread across two days, with different activities and Pokemon available during each. Day 1 featured rotating virtual habitats that shifted hourly and changed up what kinds of Pokemon appeared in the wild. In lieu of exploring outside, this was a clever way of simulating the experience of wandering into a new environment and stumbling upon different Pokemon. Like last year, it was fun to check in throughout the day to see which monsters I would encounter.

Day 2, however, was the true highlight. In contrast to last year’s event, which was “interrupted” by a Team Go Rocket takeover, day 2 of Pokemon Go Fest 2021 revolved entirely around Legendaries. Every Legendary Pokemon that has appeared in Pokemon Go to date returned to Raid Battles throughout the day, which made for a fittingly epic way to celebrate the game’s fifth anniversary. For a reasonably casual player like myself, who had seldom been able to wrangle together enough people to complete a Legendary Raid prior to this year’s Go Fest, the sheer prevalence of Raids was exciting, and I enjoyed spending the day raiding and filling out my Legendary collection.

Part of what made this year’s Go Fest feel worthwhile was the fair monetization. While some elements of the event were open to all players, you really needed to purchase a virtual ticket to get the most out of it. However, whereas tickets for last year’s Go Fest ran for $15 USD (a fairly steep price for what was ultimately an entirely in-game experience), Niantic reduced the cost of a ticket to only $5 USD for this year’s event. On top of that, the studio generously doled out free items throughout. Thanks to in-game challenges, you could earn up to eight free Remote Raid Passes during day 2, which made it all the more enticing to participate in Raid Battles. While last year felt a little lacking relative to the asking price, Go Fest 2021 more than justified its cost of entry.

But what really made the event enjoyable was the presentation. Niantic has become quite skilled at making Go Fests feel like special occasions, and that was certainly true for this year’s celebration. Throughout the entire event, confetti and fireworks filled the sky on the map screen, and in a nice touch tying back into the event’s musical theme, the background track differed depending on which of the two diverging paths–Rock Star or Pop Star–you chose.

Niantic also cleverly used the event to set the stage for more activities to come in Pokemon Go, namely the debut of the Mythical Pokemon Hoopa. While it didn’t make a physical appearance during this year’s Go Fest, the Mythical Pokemon loomed over day 2 of the event. Hoopa’s rings were omnipresent in the sky, and Professor Willow explained the Legendaries’ sudden return as Hoopa’s handiwork. It’s still unclear when exactly Niantic plans to introduce Hoopa to the game, but integrating it into the story of the game’s biggest event was a smart way to build excitement for its eventual debut.

All of these elements combined to make this year’s Pokemon Go Fest feel special, and it was my favorite event in the game yet. It seems to have been a rousing success for Niantic, as well. As the developer detailed in a blog post, players collectively caught more than 1.5 billion Pokemon and walked more than 125 kilometers during this year’s event, dwarfing last year’s numbers. Here’s hoping Niantic continues to build upon these successes for future Go Fests and keeps a virtual component to the event, even when restrictions ease and things return to normal.

GameSpot was provided a complimentary ticket for Pokemon Go Fest 2021 by the developer.

The Simpsons Doing Something It’s Never Done Before: A Fully Musical Episode