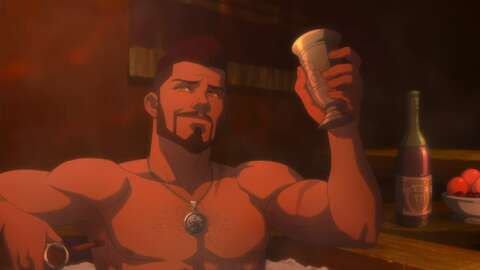 Our eye into the world of the Witcher has been primarily through Geralt of Rivia, but it’s a deep world with long history, and Netflix’s upcoming Witcher: Nightmare of the Wolf animation will take us further back than we’ve yet been. Netflix revealed today a new teaser trailer for the upcoming show, as well as the voice cast.

“Before Geralt, there was his mentor Vesemir–a swashbuckling young witcher who escaped a life of poverty to slay monsters for coin,” reads the show’s official description. “But when a strange new monster begins terrorizing a politically-fraught kingdom, Vesemir finds himself on a frightening adventure that forces him to confront demons of his past.”

The core voice cast for the show is made up of veterans of Netflix series and sci-fi in general. Theo James will voice Vesemir himself. James voiced Vesemir in the first season of the live-action Witcher series starring Henry Cavill, though he did not actually appear on-screen. Most recently, he finished out his run as Hector the Forgemaster on Netflix’s critically-acclaimed Castlevania animated series. Graham McTavish joins the series as Deglan, who seems to be a sort of father figure to Vesemir, and is the one who set him on the path to becoming a Witcher. McTavish starred alongside James in Castlevania as Dracula himself.

Lara Pulver, best known for roles in Sherlock and Edge of Tomorrow, will play the role of Lady Zerbst. She most recently appeared as Mirana in Netflix’s Dota: Dragon’s Blood series. Finally, Mary McDonnell–President Roslin in Syfy’s Battlestar Galactica and the first lady in Independence Day–will play Tetra.

The series is co-produced by Witcher showrunner Lauren Schmidt Hissrich and director Kwang Il Han, and written and produced by Beau DeMayo, who also wrote the Witcher live-action series.

The Witcher: Nightmare of the Wolf streams on Netflix on August 23, 2021. The Witcher season 2 has finished filming, and recently got its own teaser trailer. In addition to the main live-action series and this animated series, a prequel series, The Witcher: Blood Origin, is also in the works.