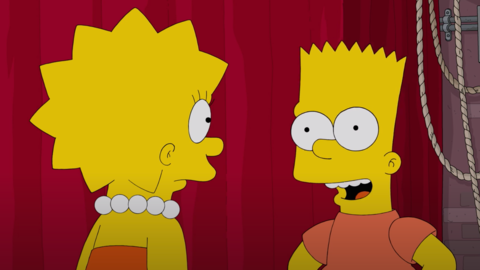 The Simpsons has been on TV for decades and has covered a lot of ground, but it’s now doing something it’s never done before. It was revealed during Comic-Con over the weekend that the popular Fox TV show will have its first all-musical episode coming up very soon.

The episode is titled “The Star of the Backstage,” and it’s set to debut September 26 as the Season 33 premiere. This will be “the most musical episode we’ve ever done,” executive producer Matt Selman said, as reported by Entertainment Weekly. “Almost wall-to-wall music. It’s like a Broadway musical of an episode with all original songs.”

Kristen Bell will sing as Marge in the episode. “We all love Marge’s voice [Julie Kavner],” Selman said. “But this is the singing voice that’s different, let’s just say.” Explaining this, Selman said Marge has a “magical inside singing voice” that, when it comes out, sounds like Kristen Bell.

Discussing the plot of the musical episode, Selman said, “Marge has amazing memories of being the stage manager of her high school musical, Y2K: The Millennium Bug, and decides to restage it with everyone 20 years later for one last show. But when her old high school nemesis comes to town, she realizes that her high school memories aren’t what she thought they were.”

The Comic-Con panel also brought news that this year’s Treehouse of Horror episode will feature five segments instead of the usual three. Additionally, a two-part episode called A Serious Flanders is coming this fall, and it’s an “epic love letter to the show Fargo, prestige crime dramas, and the world of streaming television.” Selman said, “It’s like nothing we’ve ever done before, and I hope it makes sense.” The episode features the voices of Brian Cox, Cristin Milioti, and Timothy Olyphant.

It was also revealed at Comic-Con that The Simpsons want to bring on The Rock for a voice role.