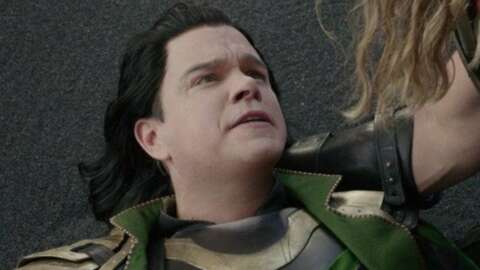 Pretty much everyone agrees that Matt Damon’s film The Great Wall is not a very good movie. That includes his daughter, who apparently gets great joy out of teasing her father, Damon himself said on Marc Maron’s WTF podcast (via The Hollywood Reporter).

“She just likes giving me s***,” Damon said. “She’s playfully hard on me. She doesn’t go to see my movies on purpose, the ones she thinks might be good. She crushes me on the ones that don’t work.”

“Whenever she talks about it, she calls it The Wall,” Damon said. “And I’m like, ‘come on, it’s called The Great Wall.’ And she’s like, ‘Dad, there’s nothing great about that movie.’ She’s one of the funniest people I know.”

That the movie was panned by critics was not news to Damon, though, who said he could see the writing on the (Great) wall after director Zhang Yimou (Hero, Raise the Red Lantern) began to cave to pressure from Hollywood.

“I was like, this is exactly how disasters happen,” Damon told Maron. “It doesn’t cohere. It doesn’t work as a movie.”

“I came to consider the definition of a professional actor, knowing you’re in a turkey and going, ‘OK, I’ve got four more months, It’s the up at dawn siege on Hamburger Hill. I am definitely going to die here, but I’m doing it,” Damon said of the experience. “That’s as s***** as you can feel creatively, I think. I hope to never have that feeling again.”

Matt Damon’s next upcoming movie, which releases July 30, is Stillwater, which tells the story of a father trying to get to his daughter, who is imprisoned for a crime she says she didn’t commit. After that, the actor is confirmed to reprise his greatest role yet, that of Actor Loki, in the upcoming Thor: Love & Thunder, which hits theaters on May 6, 2022.