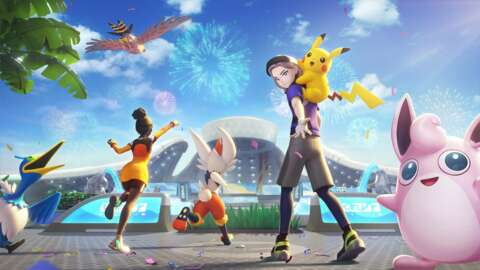 A new Pokemon is coming to Pokemon Unite this week, The Pokemon Company has announced. The Psychic type Gardevoir is joining the free-to-play Pokemon MOBA tomorrow, July 28.

In terms of its battle style, Gardevoir is classified as a ranged attacker, able to use its psychic powers to battle foes from a distance. Few other details about the new Pokemon have been revealed so far, but you can take a look at Gardevoir in action in the video below.

Gardevoir is the first new Pokemon to join Pokemon Unite since the spin-off launched on Nintendo Switch, but more additional monsters are on the way, including Blastoise. The Pokemon Company has not yet announced when Blastoise will be added to the roster, but considering it has appeared in promotional videos for the game (alongside Gardevoir), it is presumably not too far off.

Pokemon Unite launched for Nintendo Switch on July 21, with a mobile version slated to release sometime in September. The game is free to download and play, no Nintendo Switch Online subscription required, with optional in-game purchases for cosmetics and battle items. You can read all about how microtransactions work in Pokemon Unite.

As an added incentive to try the game, everyone who downloads and logs in to Pokemon Unite on Switch by August 31 will receive a free Pokemon: Zeraora. If you’re just getting started in the game, be sure to check out our Pokemon Unite guides, including our beginner’s tips and best Pokemon for newcomers.